A Visit to the Curious George Store with Jackie Gonzalez

I was turning a Curious George book carousel, seeking the perfect souvenir, when someone started pushing it in the other direction. She had arrived! Jackie Gonzalez, fellow Tufts grad, children’s media scholar and enthusiastic, and kids tech expert, joined me for a spin around the new Curious George Store in Harvard Square. The store had closed during my final semester at Tufts, and I think the whole Boston kids' media and education community let out a joint sigh of relief when it reopened this spring. 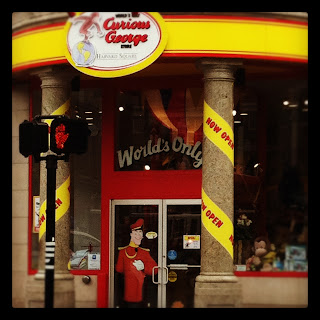 The entrance maintains its historical look, but the heightened centrality of Curious George is evident. In its last incarnation, the store sold a mix of many different books and characters. Now, George takes the forefront, with a smattering of other seemingly exclusive books and merch for kid lit lovers big and small. 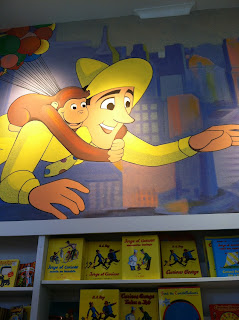 I really enjoyed the beautiful murals of George and his friends, and I couldn’t help but crawl into a small space created just for kids. The saleswoman at the store shared that this is one of her favorite features, as it allows kids to feel ownership over the store, using the space for play and quiet reading. It’s quite sweet that the store resides in Boston, just a few miles away from WGBH’s studios, home of the Curious George series produced for PBS.

Jackie and I shared a few of our favorite finds with one another. Jackie loved the imaginative play magical wand that plays a musical note when tapped against a surface (she’s SUCH a science nerd). I really loved the mini animals you could pick and choose from. I appreciated that there was something in this store for everyone, no matter what your budget. We both loved the Nancy Drew Cookbook. It must be a future gift for someone!

We ended our reunion with brunch at a nearby café. Jackie, perhaps without knowing, ordered a thematic  dish: a peanut butter and banana sandwich. George would be impressed…and then probably try to eat it. 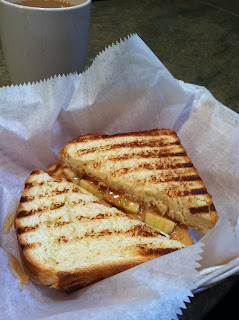 Inspired by the MoMA Century of the Child exhibit and Sarah Wallendjack's Pee-wee's Playhouse aquarium (that's right), I decided to find a few design pieces to help you create your own playhouse. 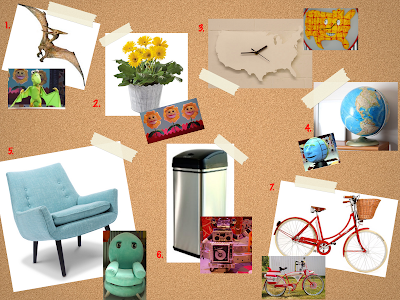 1. A pterodactyl toy or statue envokes Pterri's spirit and makes you look like you know a thing or two about dinosaurs.

2. These yellow gerber daisies may not sing, but they do breath a little life and whimsy into the space.

3. I didn't want a clock that could talk back anyway.

4. Challenge yourself to a geography test. A Globey-esque globe collection of various sizes is always in good taste, too!

5. This Jonathan Adler chair looks like it'd be comfortable and friendly.

6. Warning: robotic garbage can may open and close without command.

7. Lock this sucker up! You don't want it to get stolen like Pee-wee's.

What would you add to your Playhouse?

Tweet
Posted by Christina Zagarino at Tuesday, August 21, 2012 No comments:

Have you heard of Scotty Iseri? I hadn't until a friend sent me this article. His new project The Digits, sounded exciting and innovative, and I desperately wanted to interview him for the blog. Fortunately, Scotty agreed to share some of his inspiration and wisdom with us. Check it out and leave a comment for Scotty... 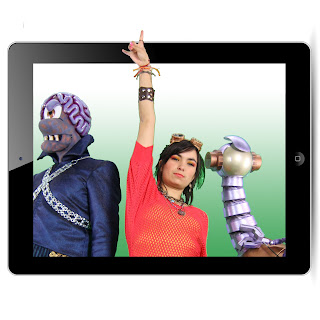 iGeneration: What prompted you to work in kids’ media?
Scotty: Kids are the best audience in the world.  I used to work in theatre and loved doing shows for kids.  They will follow your story and play along, but the minute you break your story rules, or if the characters aren't true, kids will let you know.  Sometimes rather....shall we say...vigorously? :)

Creatively I'm very interested in interactive technologies. Children are instinctually and naturally native to this technology and they have an expectation that their stories will interact with them.

iG: Tell us a little bit about your latest project, The Digits?
S: The Digits is the greatest unknown rock band in the entire galaxy.  Gorgolax, the alien drummer, Ray Ray a former home-appliance who learned to play the keyboards and Pavi, the smartest earthling in the galaxy.  They're out to stop the evil Marvwell Doomfinger III from using music to make people stupid.

The Digits is a live action interactive show designed for mobile and tablets as well as an integrated YouTube channel.  It's a show that includes, natively, all the interactivity of video games and social media.  Kids can play the apps and change the outcome of the story, all while learning math.  Or they can watch our videos online and ask the characters questions, or even get help with their homework.

iG:What inspired you to develop The Digits?
S: Well, for starters I'm an uncle.  Nine neices and nephews. Watching them grow up in the digital world really inspired the project.

iG: There are a lot of apps and media for kids out there. What are some unique qualities of The Digits that you’re hoping will get the attention of kids and parents?
S: I think kids will love the world we've created.  It can be hard to find truly enriching educational content once kids are too old for Elmo and Cookie Monster.  This ain't for babies.  We have a strong female lead character in Pavi, and a great cast of creatures, critters and characters.  The adventures we have planned for The Digits have them running afoul of a giant space worm, making a music video for a love lorn space pirate, and finally meeting up with the dunderheaded vat-grown pop stars, The Galaxy Twins.

And The Digits is a show that plays with you.  When The Digits ask "Are you ready to rock?"  They wait for you to answer.

For parents we created our educational curriculum under the guidance of a curriculum designer, and it was implemented by a 20 year veteran school teacher.  I was shocked to learn how few educational apps have an educator on their staff to create or implement their curriculum.  It's very important to us that the kids are not only having fun, but getting real educational value out of it.  I think there's an attempt to make the education "secret" or "stealthy," but in reality, I believe kids love learning.  They love the empowerment of feeling smarter, and learning something new.

Also, we're targeting a slightly older age group than most.  Our target audience is later elementary students (3rd-5th grade), which is a critical time in a child's development.  This is the age when kids are making affinity choices.  They're deciding who they are what they like, and what they're good at.  It's also when math and science start to get way more difficult.  Math moves from simple arithmetic and into more abstract concepts like fractions, or geometry.  The math around this age lays the groundwork for higher level mathematics and The Digits is a good Rocket Booster to middle school math.

Finally, The Digits rock.  Our show (and music) won't drive parents up the wall.

iG: What are the challenges and triumphs of distributing your own content?
S: One of the best things has been building a team of collaborators to make The Digits.  You have that kind of flexibility when you work independently.  We have a fantastic team of people working on the project, such as visual effects designed by Xil Creative and a camera team from Studio Pebble.  We have artwork from some amazing comics artists such as Shannon Wheeler, Derek Kirk Kim, and Ron Chan. Our development partner, Battery Powered Games, has been invaluable in offering insights on game design and distribution.

Of course, it's challenging to distribute content in this day and age, especially finding ways to stand out in a potentially crowded marketplace.  However, we have the same problem that a major game or film studio would have:  it's a busy world out there and it's quality that rises to the top.

iG: What’s next for The Digits  and for you?
S: Well, The Digits are on a mission.  They need one thousand fans to join the battle of the bands and defeat the evil Marvwell Doomfinger III.  Doomfinger has a wicked plan in store for earth and The Digits (and their fans) are the only ones who can stop him.

For me I'm working on finding funding for the next round of shows and apps.   We have plans to create a full suite of shows along science, technology and engineering.  We want to create a Sesame Street for the YouTube generation that exists on the platforms where kids are already spending the majority of their time (online and with games).  It's an exciting time to be making something new.

Thank you, Scotty and The Digits team, for a fantastic interview!

Fairy tales were so important in my family. My mother wanted us to believe in the magical, learn to expect the unexpected, and take away the lesson each story had to offer. She cites her sharing these with us as helping to instill some whimsy into our lives, but my take away was the art of storytelling. I learned that good stories, though adapted through retellings, are timeless.

I could spend a month blogging about fairy tales. Actually, I think I will. Until then, I leave you with the best fairy tale items on Etsy right now... 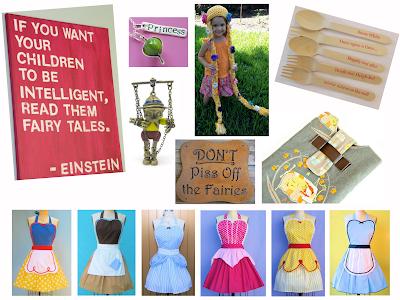 This Einstein quote provides a necessary reminder. If I were teaching right now, this would be on the top of the letter I send to parents at the beginning of the school year.

A true victory to wear the pea you felt under so many mattresses, around your neck.

The detail in this Pinnochio puppet charm takes my breath away.

A Rapunzel wig for pretend play, a costume, or just a chilly morning.

Beware: don't piss off the fairies. You'll live to regret it!

Heather Ross's Far Far Away patterns are beyond compare. I love this tech case made with her fabric.

Tweet
Posted by Christina Zagarino at Monday, August 13, 2012 No comments: