To the world of theater for young audiences, The New Victory Theater Gala is second only to the Tony awards. I missed the event twice while living in Massachusetts, and I was so excited to return this year to honor the work of Cheryl Henson, arts advocate, puppeteer, and president of the Jim Henson Foundation. Cheryl has helped shepherd countless puppet projects to international audiences, and has supported many projects at The New Victory. I first met her in a puppetry Family Workshop at the New Vic several years ago. Of course I was working with my favorite puppeteer, Spica Wobbe, but who was I to share puppets with the daughter and grandchildren of Jim (freakin’)Henson?! Cheryl was kind and encouraging throughout the workshop, and it was clear then, as it was on the night of the gala, how important the artform is to her. 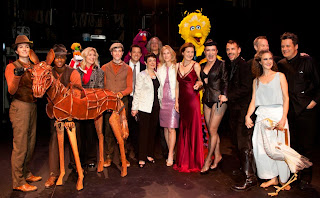 The evening was hosted by John Tartaglia and included performances from Arias With a Twist, directed by Basil Twist, War Horse, The Little Prince at The New Victory Theater, IBEX Puppetry, Leslie Carrara-Rudolph & Lolly, and Marty Robinson & Telly. The show opened with a procession of music and masks/puppets by Ralph Lee. Ralph is well-known for his giant puppeteers made most famous in the Greenwich Village Halloween Parade. He also happens to have been my masks and puppetry instructor while studying at NYU. When Bill Irwin, who was honored last year, introduced Big Bird, I nearly fell to the floor. How much better could it get? It was an unforgettable night.

I was able to take a sneak peek at the dinner setup downstairs. Oobie eyes on the wineglasses?! Brilliant! Check more pictures out here.

The evening ended with all the performers sharing a bow on stage. Out of the corner of my eye I caught Heather Henson, who performed in the gala, marveling at Joey, the horse from War Horse. You could tell she was examining his construction, his movement. Perhaps that simple look of joy and awe in the eyes of an artist was the best part of the night. I’ve seen that same look in the eyes of children watching live and televised puppet performances. To me, that’s what art is all about.

Money Makes the World Go 'Round

Have you heard? Financial literacy is all the rage. Rumor has it they're building baby banks in Park Slope, Brooklyn. Okay, you caught me. Rumor doesn't have it. Financial literacy is the new star of children's media, though. There are currently three projects, to my knowledge, that are trying to teach kids the value of the dollar, as little as it may be. It's the greatest thing since the invention of the piggy bank!

The three projects are:
Cha-Ching- a series recently launched by Cartoon Network Asia, with some brain power from Dr. Alice Wilder

For Me, for You, for Later, a partnership between Sesame Streeet and PNC- a new partnership between this well-known series and the bank (where you can open an "S" is for Savings account) promoting savings for and by kids, part of PNC Bank's Grow Up Great initiative

Which program do you think will be the most....profitable?

Tweet
Posted by Christina Zagarino at Friday, October 28, 2011 No comments: 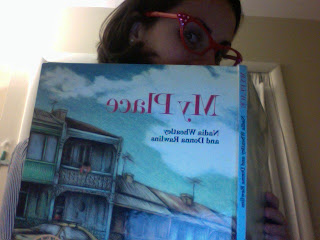 Did you ever draw floor plans or maps as a kid? I loved making my home and neighborhood feel like a place where adventures could happen! My friends and I would use our maps to find pretend treasure or to create neighborhood walks. The book My Place, by Nadia Wheatley and Donna Rawlins, shares the stories of twenty-one kids over a span of 200 years. Each story shares information about the child, her family, and the neighborhood they live in as well as a map of the neighborhood. (SPOILER ALERT!) By about the third page, you realize each story takes place in the same home and each map is a variation of the neighborhood, tracking the changes from decade to decade.

The story, published in 1988, represents Australian history. My Place is a picture book but filled with a lot of text and information. I think children over 7 would enjoy reading this alone, but I could see myself reading it to kids as young as 4. I learned about it from a recent Kidscreen article. The book was turned into an Australian television program last year; each episode sharing a different child’s story, a different moment in time. They’ve renewed the show for another season, and I'm so curious to see it. You can read more about it here.

Though this is an Australian story, I think there’s something we can all relate to. Regardless of the kind of home we live in, everyone’s neighborhood has seen change and development over the past 200 years. Wouldn’t it be interesting to track the changes and the history of your own home and neighborhood?

I would have loved to use this in my Kindergarten classroom. I would have introduced the story to my students, probably reading it over a course of two days. As a class, we could create a history of our school and school neighborhood. Maybe we'd bring in the school director or parents who attended the school to interview and help us create our map and story. At home, each family could create their own map and brief history to be shared somewhere in the classroom.

My Place is out of print, but I highly recommend you purchasing a used copy here! Do you think this show would succeed in the US?

Tweet
Posted by Christina Zagarino at Monday, October 10, 2011 No comments: