With my thesis proposal finally handed in, it seems I have more time to breath. I've been thinking a lot about new ideas...very exciting but very dangerous for me! Recently, I've come up with the idea of building an empire. Yeah, that's right...an empire. About two weeks ago, I flew out to California to visit my sister. I had one demand of this trip: we visit Disneyland.

Disney and I have always had a torrid romance. The only other time I visited their theme parks was when I was two. My parents took me to Disney World. I have no recollection of it and can only determine that it was a "meh" trip since we never returned. I grew up watching every film, knowing every song, and toting my knowledge of classic films locked up in "the vault." My father never enjoyed Disney...except for that time he cried while watching Beauty and the Beast. I didn't understand why until I got older. Things started to come together: the girls all have big chests, there's a hero who is usually male, that is unless the male is the superhero (even in Mulan and other tales that claim female empowerment), and their attractions seemed way too expensive and exclusive for my family to afford. When I got to college, I learned about their worldwide corporate superpower. I was shocked and quite annoyed...okay, disheartened mostly. If you want all of your dreams to come true, do you have to buy, sell, and own everything around the globe? Along the way, Disney has not done right by me.

Through it all, I just wanted to experience a Disney park. What was it about that place that made everyone so happy? Was it actually magical? Before leaving for California, I made a disgusting promise to myself: I would buy any and every souvenir I wanted while in the park. I really love souvenirs.

When we got there (quite early), we sat in traffic to park the car, waited in line to board the shuttle to the park. Through it all though, I had a huge smile on my face. Disney was a mystery to me, and I was about to feel the magic! 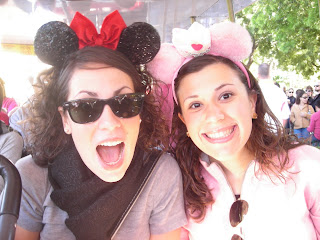 When we arrived, I saw the line for tickets...and the price. So far, there was no magic...only anger. I took pictures of the long line thinking, "This is what people don't talk about after returning from their amazing vacation." We got our tickets, lined up for the park, and officially entered Disneyland. At first glance of Main Street, I wasn't all together too impressed. It looked like a really (really) spiffed up version of Wild West City, a "theme park" about the West located in Northern New Jersey. You haven't heard of it? I'm shocked.

It was actually magical. Immediately I saw a train leaving an old time station and a cart full of people being pulled by a horse down Main Street. While eating a breakfast of pastry, I watched a Disney worker scrub bird poop off of a fake cobblestone! Please read that sentence again. Where was I?! From that moment forward, I embraced it, I reveled in it, I loved it. It was magical, and I felt magical! 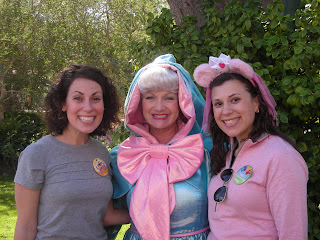 On one of my major shopping sprees (remember, I gave myself permission), I saw a book that I regret purchasing on the making of Disneyland. It was a small paperback but filled with pictures and little tidbits about all the original rides and Walt's ideas, opinions, and declarations. My favorite passage was about the Storybook Land ride (also one of my favorite parts of the park). Apparently, the massive Monstro the whale was meant as the exit of a roller coaster, but Walt realized it would be more interesting if people entered Storybook Land through the mouth of the whale, just like Pinnochio. A simple little change like that made all the difference. What kind of mind do you have to have to do something like that? 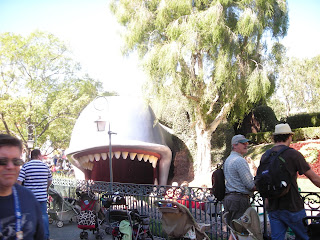 I loved seeing the old rides and the traces of Walt all over the park. Can you say "Tiki Room?" Best. Attraction. Ever. I wanted to buy one of those...unfortunately, (and suprisingly) not for sale. I thought a bit more about him. Is there anyone out there with the same power and imagination that Walt had? I think so, but then again...all those people are essentially owned by Disney in one way or another: Tim Burton, George Lucas, if a group counts then the Pixar company. They also have something else in common...male.

It's time for another empire builder...even though I officially love Disneyland and want it to continue its massive run of success. I'm not saying it has to be me, but why not? It could be you! Or you! The next Walt Disney is out there...hopefully she won't sell out to the Walt Disney Company. Or maybe she will depending on the economy...but still hold true to her independent values and desire for imagination-creation greatness.
Posted by Christina Zagarino at Sunday, November 28, 2010 2 comments: 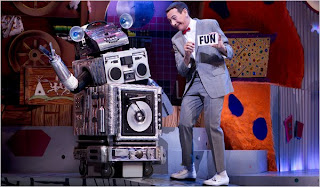 Last Thursday my boyfriend and I marked our first year as a couple. We decided to celebrate on Friday and had such a romantic day...we took the NJTransit into New York and walked midtown like a pair of holiday tourists. We window shopped passed Macy's, stopped to watch ice skaters in Bryant Park (and check out the new Kate Spade pop-up igloo), and walked up to see the tree at Rock Center. It was fantastic! We were in the city with a purpose, though. We had tickets for The Pee-wee Herman Show, the new Broadway production of the famous character from 1980's children's television. After a great dinner, we headed to the Stephen Sondheim Theater for the show. The pre-show festivities alone made me feel like a child. The merchandise kiosks provided any Pee-wee fan with enough fuel for the next 20 years. I caved and bought a tee shirt and a magnet set. Downstairs, we shamelessly spent much too much on cocktails that we could drink in the theater from a sippy cup.

As I sat in my seat, sipping my drink, the music cued and the curtain opened. I couldn't stop smiling! The show was very much written and directed for an older audience and uses audience members' nostalgia to keep the show going. We screamed for the word of the day, we helped Pee-wee say the Pledge of Allegiance (yup), and we cheered as he achieved one of his dreams.

Beyond just promoting the show and sharing my Pee-wee love, I write this blog because it's based on a children's television show from the 1980's (okay, okay...it's based on a comedy show that led to a TV special that led to a children's television show). This character was and is so very important to so many people who have now grown up and want to share Pee-wee with their families (despite his unforgettable indiscretion). The characters and stories that we create and share now could have a long-lasting impact on our culture and our children. Is there a program on television now that you think could have this similar long-lasting, cross-generational impact? Which show could you see making it to Broadway in 20 years?
Posted by Christina Zagarino at Sunday, November 28, 2010 No comments:

Ease on down the road...

It has been so long since my last post! I am hoping to post a bit more frequently in the coming weeks. In addition to my race to finish holiday shopping BEFORE Black Friday, I have been overwhelmed with school work. BUT...there is exciting news:
1. My IRB application and materials have been submitted!
2. My thesis proposal will be handed in and the hearing date has been settled for December 14th!
3. I am one step closer to disclosing all the details of my Rogers project.

I wanted to share an amazing video with you all that was shown to me by my boyfriend Joe, a huge rail fan and your future president. This video represents an idea that I've been mulling over for quite some time, capturing the importance and fun of a child's dramatic play and its relevance to their reality. Enjoy!

Posted by Christina Zagarino at Sunday, November 28, 2010 No comments: